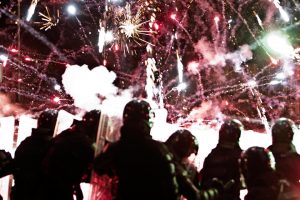 epa02408221 Police watch firecrackers being released by demonstrators in Terzigno, near Naples, during clashes in the early hours of 23 October 2010. The European Commission warned Italy 23 October 2010 that it faces legal action and fines over a burgeoning rubbish collection crisis in Naples. “I am worried by what has been happening … in recent days,” European Union Environment Commissioner Janez Potocnik said in a statement. He said the situation was “very close” to the crisis which erupted in 2007, and which led the Commission to open an infringement procedure against Italy for violating EU treaties. Rubbish has once again been piling up in NaplesÃ« old city centre while residents of the suburb of Terzigno have been involved in violent clashes with police, in protest against a new rubbish dump being built in their neighbourhood. EPA/MASSIMO PERCOSSI

This website uses cookies to improve your experience while you navigate through the website. Out of these, the cookies that are categorized as necessary are stored on your browser as they are essential for the working of basic functionalities of the website. We also use third-party cookies that help us analyze and understand how you use this website. These cookies will be stored in your browser only with your consent. You also have the option to opt-out of these cookies. But opting out of some of these cookies may affect your browsing experience.
Necessary Altijd ingeschakeld
Necessary cookies are absolutely essential for the website to function properly. These cookies ensure basic functionalities and security features of the website, anonymously.
Functional
Functional cookies help to perform certain functionalities like sharing the content of the website on social media platforms, collect feedbacks, and other third-party features.
Performance
Performance cookies are used to understand and analyze the key performance indexes of the website which helps in delivering a better user experience for the visitors.
Analytics
Analytical cookies are used to understand how visitors interact with the website. These cookies help provide information on metrics the number of visitors, bounce rate, traffic source, etc.
Advertisement
Advertisement cookies are used to provide visitors with relevant ads and marketing campaigns. These cookies track visitors across websites and collect information to provide customized ads.
Others
Other uncategorized cookies are those that are being analyzed and have not been classified into a category as yet.
OPSLAAN & ACCEPTEREN